A recent McKinsey report notes that the intensity with which firms employ Information and Communication Technologies (ICT) depends on four factors: (1) size of the firm; (2) supply chain complexity; (3) skill levels inside the firm; and finally (4) threat of competition.

Deployment of ICT facilitates reaches higher productivity levels inside the firm. The four determinants therefore seem reasonable as the firm-level literature shows that generally these four points are indeed factors that are strongly associated with greater firm performance. However, in my view, the second factor of supply chain complexity merits some elaboration and refinement, especially with regards to international trade.

It seems intuitive at first sight to think that ICT tools and instruments smoothen the supply chain network. And so, the more complex this network becomes the more this chain uses ICT to solve complex hold-up problems related to trade. This is because ICT allows for geographically dispersed production and management activities. However, the data tells something different: some supply chain trade, which requires greater ICT, may actually be related to lower supply chain complexity.

This can be seen by a measure that computes the “length” of the value chain by accounting for the number of production stages (Fally, 2012). The more stages of production involved, the lengthier the chain becomes, the more complex one can assume the supply chain is. The figure below plots the average of this indicator of supply chain complexity across a like-minded set of OECD economies for each sector on the vertical axis. The horizontal axis plots the ICT-intensity indicator from van der Marel et al (2016) to see for any meaningful pattern. 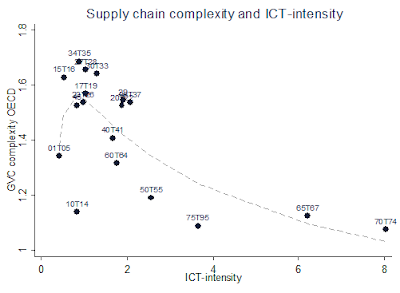 FDI Screening: Implications for the Future

Two weeks ago, I spoke at an event where I commented on a very interesting paper from Copenhagen Economics (CE). The paper assesses the economics of EU Foreign Direct Investments (FDI) and the need to undertake screening in the EU. Economists are generally weary of setting up screening measures for foreign investments as it increases substantial costs for little economic reason.

Therefore, the recent proposal of the EC to introduce screening measures has more to do with political economy, wider geopolitical or even security reasons. For instance, one of the biggest concerns is that some of the recent FDI coming into the EU is from various emerging economies such as China, Kazakhstan and Russia, which still have many State-Owned Enterprises (SOEs) in their economies.

This according to economists is a problem, but a simple back-of-the-envelope calculation tells me that the share of this FDI in some sensitive sectors flowing from these countries with much SEOs involved is at most 3.5 percent of EU’s total incoming FDI. Hence, a first question appears: does that warrant an overall screening measure? Some trade-offs are involved as obviously economics doesn’t stand on its own here.

However, my intervention was about the future of foreign investments. In particular, the changing nature of investments the EU has received in recent years, namely investments in digital sectors. This should force policy makers to think about when proposing investment regulations, including screening.

First, although it is right to state that FDI brings along a great “footprint” as economist say, this is in fact much lower for digital investments. With “footprint” we mean economic activity such as employment, value-added and greater output. Footprints for tangible investments such as manufacturing are known to be high, but the recent UNCTAD (2017) report shows that this footprint from multinational digital companies is actually much lower.

This can be seen in the figure below that measures this footprint by taking the ratio from foreign sales over foreign assets. For manufacturing and telecoms this ratio is actually 1:1 (in case of telecoms the assets are high because of infrastructure investments). Yet for FDI coming from digital multinationals, foreign assets are typically lower leading to a much higher ratio (because of higher sales), which means a lower footprint.