Here's a question for you.

I recently attended a seminar about Europe’s digital future where I was asked: “How come we have the Amazon Paradox in Europe?”. To explain, the Amazon Paradox involves the package delivery time between EU member states that is excessively long compared to the US. In short, if I want to send a package from Brussels to say Sofia, it travels for up to 8 days, whereas in case I would send it to the US, it only takes 2 days.

How is this possible? That was the question. To give context, the seminar itself was about Europe 4.0. It discussed the way in which Europe can be made more competitive through the use of new digital technologies. The automatic response to the question was that many European countries still uphold digital trade restrictions. Given that Amazon is an online platform, it must be that digital trade restrictions such as strict intermediate liability regimes or data policies are the culprit. Right?

After all, our own research showed that several restrictions regarding e-commerce platforms are still relatively high for some EU member states. Of the 64 countries analysed worldwide, European countries such as France, Germany and Italy show a level of restrictiveness that is placed above average. So, the problem of delayed package delivery in Europe must surely have something to do with these restrictions.

As a matter of fact, I don’t think so. Yes, Amazon is a digital platform and it may encounter some digital barriers, perhaps even in some digital services such as digital finance, but my assessment is that the bulk of the package delivery problem lies somewhere else, namely in Europe’s network services.

Accessing Amazon’s website and order something does not seem to me any problem. What’s more problematic are all the services that lie behind the internet transaction. The package needs to travel from one destination to another. It is most likely to use postal delivery services or any other transport and storage services. That’s exactly where the bottle neck seems to appear. In many European countries, these network markets are still largely uncompetitive.

A simple snapshot of some OECD numbers is telling. The picture below gives a screenshot of the OECD’s Product Market Database that records the level of non-digital regulatory restrictiveness in network services. The message from these numbers is quite interesting. For instance, although the market for postal service is entirely free for new firms to enter, which gives the impression that competition is optimal, the yellow column indicates that public ownership restrictions are still rampant. 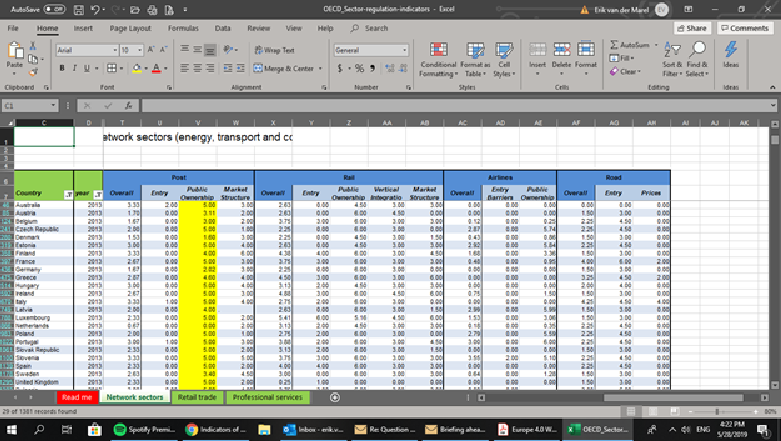 Restrictions on public ownership includes the extent to which State-Owned Enterprises (SOEs) are still present in the postal market, how much governments are generally involved with the operations of the postal incumbent firm, or whether they have a direct control over the postal services company. Restrictions in this field also relate to how these SOEs are governed. For instance, whether the state or provincial governments have special voting rights (e.g. golden shares) in at least one firm.

The scoring of this restrictiveness index ranges between 0-6, with increasing levels indicating higher levels of regulatory barriers. Looking at the yellow column, it becomes clear that many European countries have a level of restrictive regulations in the postal market that stands at 5. True, numbers are from 2013 (latest year available), but nothing suggest that all these countries have quickly reformed their markets over the last couple of years. Similar conclusions are true for rail transport services.

The European Commission is also very aware of the issue. As stated in a recent report that was commissioned by its in-house staff: “One of the core objectives of the EU’s Digital Agenda is to promote cross-border e-commerce…” The report continues: “The Commission identified expensive and unreliable cross-border delivery as one key challenge in the future development of e-commerce”. Auch!

Another report commissioned by the European Commission states the problem in clear numbers. It looked at the price differences between what it would cost to send a package within and across EU members states. And guess what, this differential price in package delivery is equal to a factor of 3.71. This comes down to an average price difference of 471 percent for packages sent to another country in the EU compared to sending domestically.

In short, these numbers point out that the international postal market delivery services are still largely uncompetitive. I think that this is the main driving force behind Europe’s Amazon Paradox. With price differences so high, it reflects that the market suffers from a lack of competitive forces from which indeed e-commerce companies like Amazon encounter a paradox: although the distance to the US is larger, package delivery is faster.
Posted by Erik van der Marel at 03:02 2 comments: