LCRs versus tariffs: The see-saw of trade barriers?

You may have not noticed it, but the use of local content requirements (LCRs) has gone up for years. They are used by developed as well as developing countries. LCRs aim to promote the use of local inputs. They also serve the purpose of fostering domestic industries. BRICS and many other emerging countries are frequent users of LCRs, together with the US.

However, LCRs can be highly damaging for the economy. While LCRs might have the perceived benefit of creating industry activity and local employment, these gains or often generated in the short-term. LCRs are most likely to have a damaging economic impact that is wider in the long run. This harmful impact therefore evolves over time, which eventually outweighs any specific short run gain they can create.

ECIPE’s new study with undersigned contribution estimates the damaging impacts of LCRs for BRICS countries. Our team has translated their negative effects into so-called ad valorem equivalents (AVE). This is a methodological concept that allows one to readily compare the adverse impact of any non-tariff barrier (NTB) such as an LCR with a tariff. Our study has taken LCRs in the heavy vehicle sector as a case in point.

The results are presented in the figure below. They show that Brazil and Russia apply the most distortive LCRs for heavy vehicles. The two countries have an estimated increase of their import price of 15.6 and 11.1 percent respectively. China and South Africa both show low AVEs of 4.5 and 3.3 percent respectively. India’s LCRs are least harmful as it shows an AVE estimate of 2.2 percent. 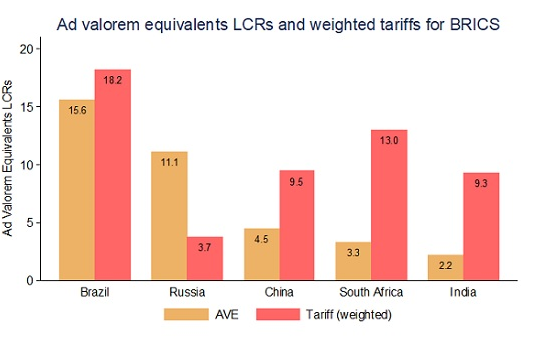 When you come to think of it, this may not be a big surprise. Over the years tariffs have gone down through unilateral, multilateral or bilateral deals governments have sealed. But this trend has unlikely satisfied everyone in the economy. One way for government to compensate actors, constituencies or firms active in import competing industries is by raising murky NTBs, of which LCRs are one of them.

We furthermore estimate the wider economic impact that LCRs have inside as well as outside this sub-sector of motor vehicles. The results indeed show that although LCRs may have a short-term effect of increasing output in the targeted sector, for the rest of the economy, including consumes, a much bigger negative effect takes place. This is important to note as everyone else suffers from LCRs.

For instance, the identified LCRs are estimated to restrict imports of heavy vehicles by -21% in Brazil and -12% in Russia because of their increased import prices (for the other BRICS countries this varies between -9.3% and -3.7%). LCRs therefore benefits the domestic heavy vehicle industry in these countries by shielding inefficient firms in the sector from any external competition.

However, the consequence is that the LCRs in the BRICS countries will in turn have the pernicious effect of (a) reducing exports of heavy vehicles themselves; (b) increasing prices for firms who need heavy vehicles as an intermediate good; and finally (c) decreasing production of closely related industries using heavy-vehicles (in part because of higher prices).

In the end, the final user, that is the consumer, is worse off in the BRICS countries
Posted by Erik van der Marel at 09:26