This can be seen in the figure below. The vertical axis plots a measure of the relative position of countries in their supply chains. Higher values on this indicator means higher GVC “upstreamness” of countries, trading more in GVS that are more upstream. The horizontal axis plots ECIPE’s Digital Trade Restrictiveness Index (DTRI) with higher values reflecting greater digital trade restrictiveness.

The graph shows that countries such as Indonesia, India, Brazil and Turkey are more restricted regarding digital trade policies whilst also trading more upstream in GVCs. Contrary, countries which are less restricted in digital trade policies are trading more downstream in their supply chains. They are closer to the final destination of the good (or service), i.e. the consumer. 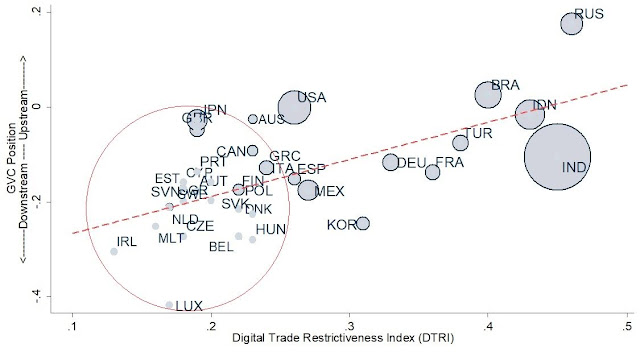 How does it work? Why is it that restrictive digital policies are associated with supply chain activities that are more upstream and not downstream? One big reason is services. Services are a lot more digital and ICT-intense than many goods. Many countries that you see in the big circle are in fact countries that are very services oriented. They are also the ones which are less restricted in digital trade.

Surely, these are sheer correlations, not yet showing causality. Instead of low digital restrictions that leads countries to specialize in more downstream activities in GVCs, it could be that countries which already were more open in digital trade, and also more active in services in the first place, have over time lowered digital trade restrictions.

No matter in which direction this link is running, given that many services are digital-intense, lower digital restrictions contributes in helping countries to realize greater level of growth through services. Services are increasingly recognized being a development tool for countries as they help them realizing greater economic growth through greater productivity effects.

This is particularly true for under-developed countries as well as emerging countries, of which a few are shown in the graph such as Turkey and India. They are currently the ones which more digitally restricted.

India is an interesting example. The country is discussing further restricting its digital sector, but India is also known for being a big exporter of digital services. India could therefore capitalize on its ICT services sector to connect better to its existing GVCs to move more downward left in the figure to join other OECD countries. However, India won’t if it increases restrictions in digital trade.

Of course, some countries are naturally placed more upstream in GVCs than others, but not India, nor Turkey or any countries in the top-right corner of the figure. Therefore, increasing the already high level of digital restrictiveness would represent a missed economic opportunity for these countries. That a pity, because the digital sector can bring many of them!
Posted by Erik van der Marel at 08:39